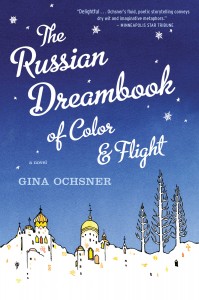 Instead of hip, sexy 20 to 30-somethings living in a plush, urban apartment or an airy, waterfront condo, the inhabitants of this story are a ragtag group of tenants living in a dilapidated apartment building in Perm, a Western city in Russia. The quirky cast of characters consists of a one-armed war veteran who jumps to his death, his wife who finds mysticism in her job as keeper of the outhouse, a journalist at the local state-run newspaper who witnesses censorship of the press on a daily basis and her soni, a young man damaged by war who thinks he’s a fish. There’s a grandmother who shouts racist and anti-Semitic slurs out the window to the embarrassment of her granddaughter, who suddenly finds herself with the task of convincing a visiting committee, The Americans of Russian Extraction for the Causes of Beautification, that the local subpar museum where she works is worthy of their Western riches.

Lulled by the fanciful surroundings and bizarre happenings—and charmed by the lamentable characters—it’s not until the moment when the Americans arrive, with their elitism and overstuffed luggage on display, that the desperation and darkness of life in the small community becomes shockingly clear.

Ochsner’s Russian Dreambook is a clever infusion of folklore, humanity, and humor and I’m glad it gave me the opportunity to speak with her about her work.

Contextual Life: Your novel has a strong folklore feel. What did you find while researching that aspect of Russian history and culture? Is there one story that captured your imagination?

Gina Ochsner: I draw quite a lot of inspiration from old tales, parables, and myths. Like the epic, myths are a form of storytelling that explain natural phenomenon or anomalies, historical events, or truths of being. And like the epic, myths take into account human nature: we love and sometimes love badly, we hurt one another, injustice incenses us while at the same time our greed, envy or anger (righteous or otherwise) can get the better of us, yielding dire consequences.

A kissing cousin to the myth are those tales (old wives tales, superstitions, legends) that swirl like dry leaves kicked about by a mischievous wind. I remember visiting the St. Charles Bridge in Prague. Every day for two weeks I walked to school over the bridge and walked home at night. The bridge, I had been told, was magical. Built in 1357, it was first known as the stone bridge long before it was called the St. Charles. It was protected by a golem who had been created by a rabbi. This rabbi, it was said, could perform miracles and in those days, the Jews needed miracles. During that time, Jews in Prague were forced to live in a ghetto (Josesov Sectre)  of suffocating confines encompassed by tall walls, to which they were remanded each day  by sundown. The Emperor, Rudolph II, a lover of sciences and particularly alchemy, had heard a rumor that the Jews possessed the secret for turning ordinary metals into gold. The formula, he reasoned, must be contained somewhere in one of their holy books. Naturally, he decided to seize all the holy books. Rabbi Judah Loew ben Bezalel, the Maharal of Prague, went to the palace to plead with the emperor. On the way a crowd of bystanders  threw stones at the rabbi. But before the stones could harm the rabbi, they turned to roses. When Rudolph heard of this, he returned to the rabbi the books he had seized. Other stories and tales have had a similar lasting effect and managed to work their way into Russian Dreambook.

Why are folktales important today?

What I’m interested in these days are tales built from older cloth, patches sewn to a larger fabric. Tales are a way to reconnect with the ancient, familiar mythic stories that tell us who we are, why we are, how things started and how things got to be the way they are now. Tales are a means of preserving, remembering, honoring, and passing along history and ideas and identity (communal, familial and inidfviudal). They are a way of preserving as a thumbprint in soft wax the shape and texture of voice—again, that of the larger group as well as the family and the individual. I can hear this in in Romanian fairy tales. Yiddish tales and Russian tales in which repetition and seemingly absurd phrasing is used as memory devices, little anchors of syntactic surprise that also peel back the patches on the fabric so that we can see how people thought, how people think, how vital and dynamic story is in helping establish here and now, there and then.

You once said that the macabre and the mundane shake hands everyday and that the invisible and visible worlds overlap seamlessly. How does this view affect your daily life? Your purpose and aim in storytelling?

C.S. Lewis once said, “Miracles are a retelling in a small letters the very same story which is written across the whole world in letters too large for some of us to see”.

I’m interested in intersections, partings and crossings, convergence and divergence, thresholds. We live in a realm in which the mundane and miraculous regularly shake hands, a realm in which the sacred and profane commingle just as the invisible and visible seamlessly overlap. Our human limitations prevent us from perceiving the overlap, but I suspect we sense it all the same: that prickling at the back of the neck that something’s not right, that sense of awe—unexpected, unaccounted—when we catch a glimpse of the eternal and perceive in our smallness, the largeness of the world around us. I stumble upon it in nighttime dreams in which images cavort and collide, demanding that I take some notice of them, even if I don’t understand them.

Dreams are a reoccurring theme in your book; all your characters appears to be afflicted by them. What is their significance?

I find myself a dream-afflicted, dream-haunted person. I take consolation from the awareness that there are others out there like me. The Old Testament, for instance, is loaded with accounts of dreams and their dreamers who did not always know what their dreaming meant.

I like Diane Glancy’s work because she deals with dreams. In her story The Man Who Said Yellow the dream is more than a parlor-trick meant to provide some character enrichment or foreshadowing, a nudge to the reader to say: hey here’s what’s coming up next. Dream becomes as active as the character who harbors the dream. I’m longing to understand and do more with them in my work.

Some of your characters have serious flaws yet they are lovable—and forgivable. Was that important to you?

I have to say that being humans made of dust and mud and super-organic stuff like that, we are humble creatures. That is the only way I know how to approach fashioning characters: in a posture of humility, recognizing that my flaws and failures will very likely migrate in some manner to the people who inhabit the story I’m chalking out. I think it is in failure and in some cases, even moral or spiritual depravity, that I feel I can best explore what it means to be a human, which is to say, what it is to be in a state of needing grace most desperately. Of course not all characters recognize that that is their REAL problem and even if they could see their need for grace they would not do what is necessary to receive it. This is the moral territory Flannery O’Connor so fearlessly and unswervingly romped through and I find her take on evil and violence as it pertains to her characters wildly illuminating.

You’re now working on a book about the Roma. As with your characters in The Russian Dreambook, they are a downtrodden group. How do you approach telling the story of often voiceless groups?

How stories evolve, mutate, and grow over time becomes, in and of itself, a story: What will be told? What will drop out in future retellings (and why)? What’s really important and what musn’t we ever forget? In what words and images shall we remember? How a story is shared in a family or community represents something about that family or group: what they believe in, what they value, what amuses them, what incenses them, who is the most trusted source of gossip and who shouldn’t be taken seriously, and what justice is and how it is meted out. While from culture to culture, group to group, family to family, the questions might be phrased somewhat similarly, the answers and how the answers are made manifest in the body of story can be astonishingly different.

What about the Roma, so far, has left an impression on you?

As a mother of four children with a passion for storytelling, specifically in the realm of the mystical and magical, what books have you read together recently?

We’ve been reading Lemony Snicket, and Jabberwocky, a new edition with great artwork by Stephane Jorisch. We still return on a regular basis to The Golden Keys by Peter Sis. It’s a lovely and magical book of passageways that open upon passageways, keys that unlock ghostly libraries, a bridge who holds a sleeping golem. The Very Persistent Gappers of Frip by George Sanders. The title alone sends us into gales of laughter, but beyond the goofiness of the story (and it IS most wonderfully goofy) it carries a profound message to which the kids can relate: they are more than capable, they are more than the narrow limits others allow or set for them. They are strong and wise and good BUT, if in spite of their traits and attributes, insurmountable problems arise, all they need to do is ask for help. They don’t have to be little heroes all the time. I think its good for kids to know that the adults in their universe aren’t holding them up to impossible standards that the adults themselves can’t attain.

Gina’s stories have appeared in The New Yorker, Tin House, Glimmertrain, and the Kenyon Review.  She is also the author of two short story collections: The Necessary Grace to Fall, which received the Flannery O’Connor Award for Short Fiction, and People I Wanted to Be—both of which received the Oregon Book Award. You can visit her website at www.ginaochsner.com.

Gantzky admires Portland from afar and has fond memories of her visit to the city years ago. Living in Brooklyn and working in Manhattan, she pushes books on people for a living–whether they like it or not. When she doesn’t have her nose in a book, Gantzky can be seen wandering the streets listening to a variety of podcasts and taking pictures of wacky things that cross her path.

You can follow Gantzky on Twitter @contextual_life and check out her daily picks at www.thecontextuallife.com. If you’d like to send feedback or nerd out about books, Gantzky can be contacted at [email protected].