Why Read the Classics?

When I think back to high school English class, what comes to mind are all the books I pretended to read: John Knowles’ A Separate Peace, Steinbeck’s The Pearl, even Mark Twain’s Tom Sawyer. Early on I found that if you listened to the teacher and regurgitated his or her words, you could get by with decent grades. I thought I was outsmarting the system.

Every so often a book captured my attention—usually something short. Animal Farm was one and while I’d heard it was an allegory for the Soviet Union, with the animals representing the players in the Revolution, I didn’t have the slightest idea which character represented which Russian and what Orwell’s point was. The larger lesson was lost.

The classics, and the purpose for reading them, were beyond the limits of my teenage comprehension and, as far as I know, no one tried to explain. It wasn’t until after I graduated from college that I woke up to literature, starting with Tolstoy’s Anna Karenina, a choice that stemmed from a curiosity of Russian history. I don’t remember falling in love with it, or even liking it all that much, but I finished it and at 850+ pages that alone felt like enough of a reward.

Since my early 20s I’ve gone through a few “classics kicks,” a period of time set aside for titles deemed indispensable to one’s literary resume. One summer it was Ray Bradbury’s Fahrenheit 451, F. Scott Fitzgerald’s The Great Gatsby, and Edith Wharton’s House of Mirth. The next it was Dostoevsky, Aldous Huxley, and Kafka. Most recently I’d finally gotten around to the heartwrenching Uncle Tom’s Cabin, the eerie Flowers for Algernon, and the convincing dystopian novel by Kurt Vonnegut, Player Piano.

This methodical cultivation of the classics paved the way for an appreciation of what late novelist and short story writer Italo Calvino said in his essay Why Read the Classics?

We do not read the classics out of duty or respect, only out of love. Except at school. And school should enable you to know, either well or badly, a certain number of classics among which—or in reference to which—you can then choose your classics. School is obliged to give you the instruments needed to make a choice, but the choices that count are those that occur outside and after school.

Finally, an answer to why we were assigned all those stodgy books—those “Dead White Men” as my classmates and I unimaginatively called them. A piece of the puzzle was firmly in place, albeit two decades too late.

The thought of having a classic to call one’s own, a “classic author . . . you cannot feel indifferent to, who helps you to define yourself in relation to him, even in dispute with him,” as Calvino puts it, is provocative; and Calvino’s classic makes the quest sound even more intriguing. Illustrating what a complex relationship this can be, dismissing any notion that reading a classic must be a wholly enjoyable experience or that it needs to be fiction, he chooses Rousseau because “everything that Jean-Jacques Rousseau thinks and does is very dear to my heart, yet everything fills me with an irrepressible desire to contradict him, to criticize him, to quarrel with him.”

Although no longer indifferent to intellectual pursuits, I was a late-bloomer and sometimes it’s hard not to regret my delayed education. I didn’t lay the groundwork for my classic during my teen years and, to be honest, I can’t say I’ve found it yet, at least not in the singular sense. In a broad sense however, I gravitate towards works that seem culturally relevant at the moment, a consideration that led me to Uncle Tom’s Cabin.

The political rhetoric of the past few years had briefly revived the slur “Uncle Tom” and I was no longer satisfied with a peripheral understanding of the term. It was only by reading the actual text from which it’s derived, witnessing and internalizing the lives of the characters, that the insult took on a far more visceral quality thereby confirming what Calvino means when he says that “the classics are books which, upon reading, we find even fresher, more unexpected, and more marvelous than we had thought from hearing about them.” Sometimes only first-hand knowledge can do the trick.

Uncle Tom’s Cabin could have been assigned to me in high school and had I read it I might have had a better understanding of slavery, possibly benefiting in some way from a deeper knowledge of American history; but Calvino believes I needn’t despair. He goes on to compare reading classics while young to reading them “in one’s maturity,” saying that there is “extraordinary pleasure” to be had in reading these books later on in life, an experience different from reading them in one’s youth.

Youth brings to reading, as to any other experience, a particular flavor and a particular sense of importance, whereas in maturity one appreciates (or ought to appreciate) many more details and levels and meanings. . . . In fact, reading in youth can be rather unfruitful, due to impatience, distraction, inexperience with the product’s “instructions for use,” and inexperience in life itself.

This last part about inexperience brings me back to my reading of Animal Farm and my inability to see the depth underneath the simple plot. I had not lived enough to know the ins and outs of revolutionary history. To my luck, and to the luck of others who had only been capable of a cursory reading of the classics, Calvino shows that all is not lost, that there is value to be had even in the most naive reading of a classic.

Books read then [in youth] can be (possibly at one and the same time) formative, in the sense that they give a form to future experiences, providing models, terms of comparison, schemes for classification, scales of value, exemplars of beauty—all things that continue to operate even if a book read in one’s youth is almost or totally forgotten. . . . A literary work can succeed in making us forget it as such, but it leaves its seed in us.

Again, Animal Farm comes to mind. This 11th grade reading choice sparked my interest in The Communist Manifesto. I even went so far as to buy a copy to read on a family trip to California, feeling subversive while waiting in the security line with the book tucked into my carry-on. If I didn’t understand Orwell then, I definitely didn’t understand Marx and Engels. I never got past “proletariat”. In a way it doesn’t matter because it ultimately served a purpose; I can see a direct line from this early moment in my life to my later, more mature interest in both Russian history and political philosophy. Looking back, Anna Karenina now seems like an obvious choice for my first adult reading. It’s as Calvino said, this classic served to “exert a peculiar influence”. 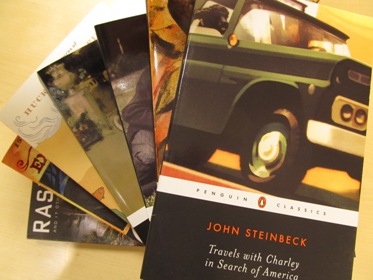 As a whole, Calvino’s essay reminds me of how satisfying the classics can be, a process which starts when deciding which to read and ends with a sense of accomplishment; however he concludes with a sense of ambivalence saying “that to read the classics is better than not to read the classics.” Not exactly a powerful argument. But he has a point; just as these lauded works can add a richness to one’s worldview, it would be a stretch to consider them a requirement. One can live completely without ever having read Jane Austen, Emily Bronte, or Ernest Hemingway. However, it is nice to know that if a life of literature is what one chooses, it’s never too late to start.

How has your relationship with the classics changed over the years?

Have you found your classic?

Does your focus shift over time or are you consistent with the books you pick?

What was the last classic you read?

What was your reason for choosing that one?

Have you ever reread a classic years after your first encounter? What was your experience?

What classic should everyone read?

Links
This essay is based on Italo Calvino’s essay Why Read the Classics?, which is included in the collection, Uses of Literature.

Here is a list of classic literature on Sparknotes.com where you can also find background information, plot summary, character descriptions, and more.

Gantzky admires Portland from afar and has fond memories of her visit to the city years ago. Living in Brooklyn and working in Manhattan, she pushes books on people for a living–whether they like it or not. When she doesn’t have her nose in a book, Gantzky can be seen wandering the streets listening to a variety of podcasts and taking pictures of wacky things that cross her path.

You can follow Gantzky on Twitter @contextual_life and check out her daily picks at www.thecontextuallife.com. If you’d like to send feedback or nerd out about books, Gantzky can be contacted at [email protected].