7.6.11: Look Before You Leap: The Quandaries of a Book Reviewer

Look Before You Leap: The Quandaries of a Book Reviewer

It would seem, at first blush, that a book reviewer needs only to read the book in question and then to write up his or her thoughts. Sometimes it is just this simple. However, I’ve found that some unexpected issues – almost moral in nature – arise from time to time.   Let me go over a few of those here with you.

Sometimes two books, fiction or nonfiction, are released at the same time and contain virtually identical content. It may be that both books are biographies of a former First Lady or of a 70-year-old folk rock singer… It may be that both novels tell a story that is the same one from start to finish. How does a reviewer handle this? First of all, is it relevant? I think it is, but then how is the reviewer to make use of this factor?

Do both books get downgraded due to a lack of originality, or does one accept that this is simply what happens in life (independent and spontaneous creation)? If two books are almost the same, does this not beg for a comparative review – a determination of which is better (like DVD versus BlueRay)? And doesn’t this mean that one of the two must be selected as the winner, and the other as the loser?

Should a reviewer ever express a suspicion that one writer may have copied the other – or at least cribbed an idea from the other? Or should all of this be put aside, so that the reviewer is – in effect – placing his hands over his eyes, ears and mouth like a monkey?

Let’s say that the reviewer has a favorite author and is very much looking forward to reading this writer’s latest work (in our example, a novel). For illustrative purposes, I will use one of my favorites, Pat Conroy.   If I’ve loved every one of his novels and then I find that his latest release is a dog, what do I do? Or, rather, what should I do? Do I compensate for this by stating that every author is going to have a down period (a compensation for a lifetime of achievement), or should I slam him since I know full  well that he’s capable of doing far better than this?

Is a talented author to be given a pass when he delivers something less than his usual best, or should the reviewer explicitly make the case that this author has gotten lazy – or something worse?

Some less-established authors may have only published a couple of novels. I’ve found instances where one of the two is near-perfection (more often the debut novel), while the sophomore effort pales by comparison. Is this something that should be mentioned in a review of the more recent release, or is it outside the bounds of propriety or relevance? Is it acceptable for the reviewer to write something like, “While this new novel is not up to the standards of the author’s first, he clearly has demonstrated the ability to produce an impressive product the next time around.”

Does the average book review reader really care about whether the author is getting stronger or weaker, or does that reader simply want to know whether this book is worth purchasing or not?

The Same Thing, Over and Over

There are a few authors who write a great story – the sole problem being that they’re known for writing the same story, the same novel over and over again. In one recent case, a publisher stated that a very successful author’s new novel was “completely new and different,” as if to apologize for all of the almost-photocopied novels (with similar cover images) that preceded it. Should the reviewer judge each and every novel with the almost-same plot and resolution on its own merits – on “all fours” as law school professors state, or is it justifiable to critique the author’s novels for a lack of originality?

If you love a particular author whose books just happen to be very similar, does it bother you or is it something that you’re able to put aside – like knowing that some rock bands are continuously original while others are not?

If you happen to know the answers to these questions, please feel free to let me know. In the interim, I will continue to stumble along not quite knowing (in the words of the immortal Van Morrison) “what is worst or what is best.” 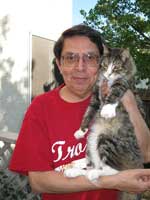 Joseph Arellano has a background in law and communications. He served as a government agency Public Information Officer, and has done pre-publication review and editing work for a publisher based in England. His book critiques have appeared in several publications including San Francisco Book Review. He and his wife live in Elk Grove, California.