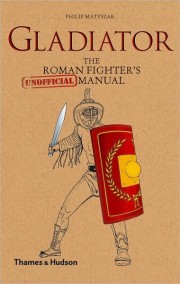 Philip Matyszak has produced a book that’s at once tremendously accessible to the general reader, amusing, and educational.  it’s filled with advice, on how to behave, where to go, how to train, what you’re likely to expect, with photos, diagrams and maps of the best locations to get punctured by a trident.  Written from the perspective of a prospective gladiator in the year 180AD, we learn what it takes to become and why it’s a tremendously BAD idea to be a Gladiator.  The men of the sword, (and some women) were the lowest of the low, they were slaves, even the ones who signed up for it voluntarily. Sure, you might win the hearts of thousands of blood-crazed Romans, and have a bevy of bored Senator’s wives queue at your prison cell door after the blood dries on the sand, but chances are you’re probably not going to survive your first fight.  Do you know why we remember the name Michael Jordan? There’s only been one of him. It’s not much different in the world of the Gladiator. Ahh, who are we kidding?  You know you’re going to sign up anyway.

Dr. Matyszak’s book teaches us that you’re probably best off in one of the larger minor cities, such as Ephesus (in Modern Turkey), they have some great health care, and the fights aren’t always to the death, it’s not cost-effective. You’re going to want a cool gladiator name, some fancy armor and a good shtick.  From the description, it’s like a combination of the NFL and professional wrestling, except there’s no collective bargaining and it’s not going to be a chair that they whack you over the head with when your back is turned.  It may be written in a light and breezy manner, but there’s some genuine scholarship in this book.  I’d genuinely recommend this book to anybody who loves Rome, or as an off-beat gift to the MMA fan in your life.