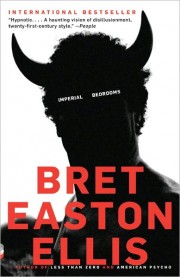 Brett Easton Ellis’ Imperial Bedrooms summed up in 46 words: nihilistic, morally devoid rich kids first introduced in 1985’s Less Than Zero are brought back in seedy 2010 Hollywood to perform more despicable acts, show how bankrupt and corrupt Hollywood and the entertainment industry are, do drugs, sexually abuse wannabe starlets, and occasionally end up dead. Your humble reviewer’s assessment of this novel: who cares?

Fans of Ellis will probably read depth and profound truth about the nature of humanity (and its lack of humanity) in this novel; will probably find profundity in Ellis’ descriptions of Hollywood’s sex-slave industry and the lack of values of his characters. They may even have some investment in the characters that Ellis first introduced a quarter-century ago. People who are not fans of Ellis, or are, like your reviewer, new to his writing, may be underwhelmed by his prose (mediocre), his story line (yawn), and his predictable characters (one-dimensional).

Maybe in the ‘80s, there was something to be gained from this sort of novel, from Ellis’ particular type of privileged-but-aimless-and-cruel characters, but coke parties and beating hookers aren’t shocking—or interesting—these days. Simply put, there’s absolutely no reason to care about anything that happens in this boring and trite novel.