My Song: A Memoir 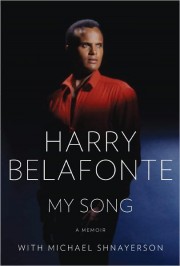 by Harry Belafonte with Michael Shnayerson

Harry Belafonte is best known as a successful folk-pop singer who appeared in films and was active in the Civil Rights movement. This memoir reveals the depth of his activities in the struggle. Belafonte was a friend of Martin Luther King Jr. and contributed a tremendous amount of time and money to the battle for racial equality. The book reveals his complex relationship with the actor Sidney Poitier, and his introduction of South African singer Miriam Makeba to American audiences. Along the way are some interesting surprises, including his work as a serious student of drama, and his not quite successful early career as a jazz singer.

Behind the façade of a sophisticated, handsome entertainer is the story of a father who abandoned him, and a mother whose approval he could never quite attain. Through decades of psychotherapy with a compassionate and gifted analyst, he has been able to overcome these difficulties and to finally settle into a rewarding family life. Belafonte has graciously accepted the fact that fame does not last forever, but he continues his efforts towards racial and social equality. This is an absorbing story of a complex man who has contributed much of himself in the struggle for a better America.