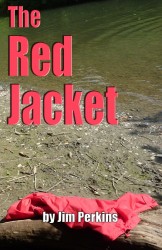 Do not let its plain cover deter you. The Red Jacket is a straightforward, almost charming novel about a young man growing up in the 1960s. Sixteen-year-old Francis grapples with the usual problems: he resents being the eldest son of a large, poor family, he dislikes his stepfather, and he thinks about girls without knowing too many of them.

Less typical of the usual teenager, though, Francis also wrestles with his conscience. Recovering from a nasty illness that almost killed him, the boy wonders if he should become a priest or not. Not a lot of characters think about Elvis Presley and Jesus at the same time, but Francis is fleshed out enough to have these amusing contradictions.

While the novel delves into the many reasons to go into the priesthood, its most entertaining and natural moments come from the family scenes that feature bickering, reminiscing, and the crazy grandfather who makes his own wine and talks about Italy all the time. The author writes these sections with skill and humor, and he gives Francis just enough serious trials to help him decide his path in life.

Readers who want to dive into rose-colored nostalgia and don’t mind some religious musings should give The Red Jacket a try. They might be pleasantly surprised. Indeed, with a more appealing cover and some minor formatting, this novel should be a hit with Christian readers.