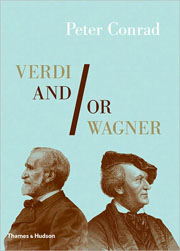 Verdi and Wagner, giants in the world of music and considered by many to be the greatest opera composers ever.  Verdi, with his lyrical melodies and haunting dramas that captured the human emotion and made us look in our soul and Wagner the world builder, who told epic tales and created new worlds. Both men lived during the same time in Europe, a time of revolution and upheaval, but they never met.  In this book Peter Conrad compares them side by side, using an analysis not through time but by topic, from their views on the state to how they viewed the concept of love and romance. Verdi was much more in tune with what was happening to the average person while Wagner could only see the top of the mountains. They also had completely different personalities with Verdi often working himself to exhaustion, while Wagner felt that the world should come to him.

There are a few problems with this work.  First, it should not have been attempted at all. Second, it should have been 100 pages shorter, the reader gets bored.  Third, the lack of any bibliography or notes is highly disturbing.  A book about great men, but one that you should avoid.