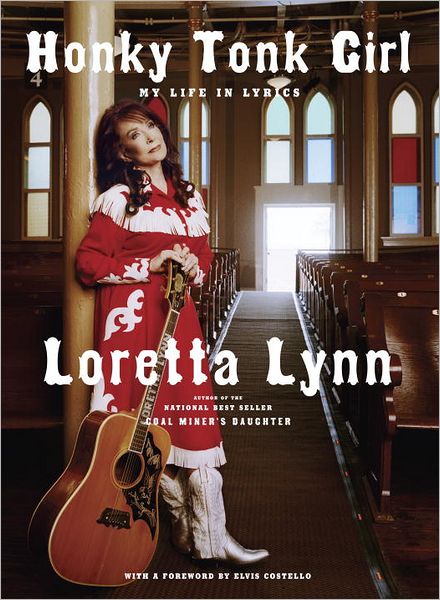 Loretta Lynn is the real country deal. Her rags-to-riches story was made famous in her 1976 best-selling memoir, Loretta Lynn: Coal Miner’s Daughter, which was made into an Oscar-winning film. She was the first woman to be named Entertainer of the Year by the Country Music Association and is beloved by musicians of all genres.

In Honky Tonk Girl: My Life in Lyrics, that includes a touching forward by Elvis Costello, Lynn shares her memories of the people and places that inspired her to write some of her most famous songs throughout her more than fifty-year career. She talks about writing “I’m a Honky Tonk Girl” after a performance one night, when she met a woman with seven children who was dumped by her husband for a younger girl. They sat down together, drank a few beers, and then cried. Plenty of her songs pine over losing love and home wreckers, but she also tackles the social issues of birth control and war. She always speaks her mind and holds nothing back.

The book includes lots of memorabilia, over 100 photographs, and anecdotes that offer insight into her hardscrabble childhood in Butcher Holler, Kentucky. She also touches on her collaboration with Jack White of The White Stripes fame, who Lynn refers to as that “rock and roller from Detroit.” They ended up working together on the Van Lear Rose album which White produced in 2004. Several of the songs listed toward the back of the book have yet to be released, so there’s hope for a new album on the horizon.

Lynn says that she only writes about stuff she’s experienced, and that becomes obvious when you read her heartfelt lyrics and observations. This is a beautiful book and a must-have for any Loretta Lynn fan. My only complaint is that I would have loved to read even more about her song-writing process.