Lance of Earth and Sky: The Chaos Knight: Book Two 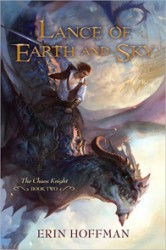 When we last left Vidarian Rulorat, he had used a powerful sun ruby that opened a gate between worlds, a choice that had consequences both for Vidarian personally and for the universe. An unexpected change is Vidarian’s connection with his friend Ruby, whose body is now dead but whose spirit is trapped inside the ruby. Being called on to aid the emperor in the impending war and deal with the lasting effects of the gate, Vidarian must work to stabilize the world again before it is too late.

Lance of Earth and Sky is the exciting sequel in Erin Hoffman’s new series, The Chaos Knight.  It picks up where the first book left off (reading them in order is extremely important) and does a great job of showing the effects of the choices that were made in the first novel. It also shows how Vidarian’s character changes when dealing with the effects of grief, lost love and war. The political storyline is also intriguing. Fans of the first book will enjoying reading about Vidarian’s further adventures.