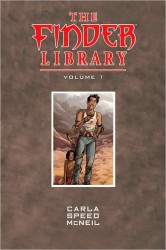 In 1996 Carla Speed McNeil began writing, illustrating and publishing her Finder series. Fifteen years later Dark Horse comics decided to compile several issues into The Finder Library. In this first volume are three story arcs, Sin-Eater, King of the Cats and Talisman. Readers will be impressed by the book’s art work. McNeil has an ability to create beautiful images with simplistic lines. It is no wonder that he is described by Douglas Wolk in the introduction as, “A cartoonist’s cartoonist, the kind of artist that other comics professionals talk about with a little bit of awe.” Unfortunately, attractive art is where this tome’s positive features end. It is obvious McNeil is trying to create a brand new science fiction world, complete with its own languages, races, professions and technologies.

However, dropping the reader into the center of all of this does not necessarily lead them to want to learn more. Instead it is easy to read the first chapter, not have an inkling of what is happening and give up, frustrated at having spent hard earned money. Finder is the kind of comic that you really want to enjoy. Beautifully enticing illustrations suck you into believing there is a great story to match, but sadly the confusing storyline and lack of clarity make Finder very unlikeable. If you have been a fan of Finder since its inception, this collection will remind you why you stuck with it for so long. If you are new to the Finder universe, be prepared to slug your way through 600 pages of story before you find answers in the appendix at the end.