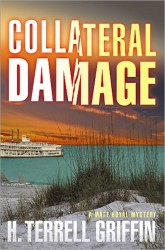 While retired lawyer Matt Royal is living an idyllic life, fishing off the Florida Keys in his boat, a passing dinner cruise ship runs aground on a sandbar. After assisting in the rescue of passengers, he learns two people aboard were murdered shortly before the accident. A couple days later, a fellow veteran of the Vietnam conflict appears at his door. The man, “Doc”, had saved Matt’s life in the war. He asks Matt to investigate the recent sniper shooting death of his son which occurred a few days before on a nearby beach. The investigation pulls Royal from his quiet island life into a complex series of events, including attempts on his own life.

H. Terrell Griffin is a board-certified trial lawyer who lives in the Florida Keys. He is the award-winning author of Wyatt’s Revenge, Blood Island, Murder Key and Longboat Key Blues. His descriptions of a laid back beach dwelling life are wonderful.

This story is a real puzzler. There are more trails leading off the highway of the plot than most readers can follow. You’ll almost need a scorecard to keep track of all the subplots, the players and their roles in the mystery.