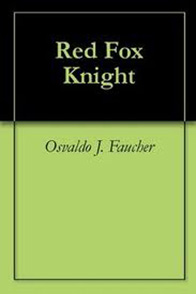 Red Fox Knight is an enthralling read; an escapist work of fiction coupled with real-life scientific theory and historical insight into the Middle Ages and knighthood, Osvaldo Faucher is a thrifty storyteller. His novel unfolds with the inspired events of the First Crusade, which introduces to the reader an age-old scroll detailing the last days of Jesus Christ that may or may not go contrary to the universally accepted biblical account of the day. This serves as an equally canny and masterful outline to the remaining plot lines in the book, which diverges between three different groups of characters: first story is set in NYC with an entrepreneur savant,  Robert Whiteside and his wife, a defector from Russia turned anthropologist, Olga and their son, Edward; the second is set in Boston with an ex-priest, Professor Alan Mullins and his girlfriend Blanche; and third, in Paris and Lautremont, is a direct descendant from the Red Fox order, François Premet and his wife Thérèse with their daughter, Emily. Thus amplifying the circular quality of the work, these characters are all interconnected through the peg of this ancient and extremely valuable religious text. Though crafty in delivery, much of the time span from the past to the present–in between chapters and suggested occurences–as well as the transitioning hence forth between each and every one’s exposition is extremely muddled and awkward. For instance, we learn of Alan and Blanche’s backstory in the very beginning of the book, and about two hundred pages later, they only reappear relevant to this serpentine tale. And just like the typos and grammatical errors in the book, there are abrupt situations that interrupt and interfere with the cohesiveness of the various stories. All and all, too much is going on in these 800 pages rendered with arbitrary sex scenes and coerced dialogue, that of which becomes suddenly catastrophic with cancer, death, love triangles, and abduction. Also, much of the labyrinthine flair and quality to Red Fox Knight is overly wrought and therefore falls flat because of the heavy handed banter; throughout the course of the book, the characters are on their soapboxes about moral, ethical, and legal issues, so no real action is hereof. But nonetheless, Osvaldo Faucher’s superb insight and introspection hits it right on the head when he writes, “each group is looking for its final truth about life in this world” and this is Red Fox Knight effectively: an excavation of history and human interaction, where one can find purpose and validity in religion and/or scientific reasoning.