On Self-publishing By Sheli Ellsworth

On Self-publishing
By Sheli Ellsworth

Sometimes well-meaning, experienced, professional publishers get it wrong. Many famous noteworthy writers resorted and reveled in publishing their own work. If you are shopping for printers or have Xlibris on speed dial, take heart, you may be in good company.

Prince of Tides and The Great Santini author, Pat Conroy couldn’t find a publisher for his first book, The Boo, and self-published. Poet e. e. cummings self-published No, Thanks and bound it at the top like a steno-pad in to snub the 14 publishers that had turned him down. Stephen Crane (you remember the Red Badge of Courage) borrowed the money to publish Maggie: A Girl of the Streets—turned down by publishers because it was too “gritty”. Barry Eisler, thriller writer of the the John Rain series turned down a 500,000 publishing contract for two books, opting to release his work as e-books on Amazon.

Western adventure author, Zane Grey had difficulties with his his first novel, Betty Zane (1903). It was rejected by Harper & Brothers and he lapsed into despair. The novel dramatized the heroism of his ancestor who saved Fort Henry. He self-published it, perhaps with funds provided by his wife Dolly or his brother R. C.’s wealthy girlfriend Reba Smith.

New-to-the-writing- world, Amanda Hocking has sold 1.5 million books in the last 18 months. James Joyce self-published the bestseller Ulysses. D.H. Lawrence, penned Lady Chatterly’s Lover in 1928 and was forced to have it published in France after it was banned from the United Kingdom until 1960 for its explicit sexual references. It is required reading in many American universities to this day. J.A. Konrath wrote nine novels, received 500 rejections and now has his own page on Amazon with over 100,000 ebooks sold.

John Locke, a British philosopher, self-published in the 1600s (publishers have been a problem for a while). Poet and novelist Anais Nin published Under A Glass Bell on her own printing press, which she named Gemor Press (a play on the name of her employee and lover Gonzalo Moré). Fantasy writer of the Inheritance Series, Christopher Paolini self-published. Edgar Allen Poe contracted a Boston publisher to print Tamerlane and Other Poems when he was only 20 years old. Beatrix Potter had the Tale of Peter Rabbit declined by several publishers before she decided to self-publish. The Joy of Cooking, author Irma Rombauer, was initially written, published and marketed by the author who had no writing experience and was not a professional chef.

Virginia Fellows originally self-published The Shakespeare Code which was then published by Snow Mountain Press and eventually rocked the literary world with convincing research that Shakespeare’s work was really authored by Sir Francis Bacon. Walt Whitman self-published the first edition of Leaves of Grass, which contained only 12 poems, while the final version had over 400.Virginia Woolf self-published most of her work through Hogarth Press which originally hand printed the books. The No. 4-selling Kindle book (it has been as high as No. 1) is The Hangman’s Daughter by German novelist Oliver Potzsch was self published with over 100,000 copies sold.

“Gone are the days,” writes Publishers’ Weekly, Paul Nathan, “when self-publishing was virtually synonymous with self-defeating.” And good riddance . . .

Sheli Ellsworth is a free-lance writer and mother of two teenagers who lives in Thousand Oaks, CA. She has a master’s degree in psychology used mainly to annoy family and friends.

Her writing has been published in the Pacific Daily News, the Ventura County Star, BackHome magazine, Auto Week, Zone4 and she also writes Dear Miss Betty-advice for those who need to be slapped for Spotlight on Recovery.

She also recently The Psychoanalysis of Everyday Life – Sometimes I Pee When I Laugh: A Collection of Humorous 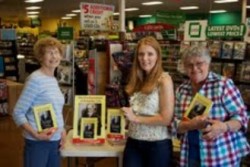 Observations through Beach House Books. Check out this review posted on Amazon.com; “My wife and I both got this book and both annoyed the crap out of each other by laughing out loud while the other was trying to read. ”