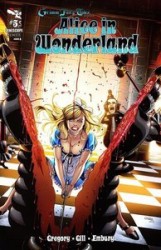 This comic is the fifth installment of Zenescope Entertainment’s Alice in Wonderland series, which opens with Alice crawling out of the Rabbit Hole, much to her grandparents’ surprise. The story cuts back to Alice making a deal with the Red Queen to ensnare and kill the Jabberwocky and the Queen of Hearts. Through this issue, we learn the brief history of the Red Queen’s fall and the ill fate that has befallen her son, the only person who can free her. Can Alice lead the Red Queen and the Jabberwocky into her trap? How will the final showdown end?

The graphics in this issue are beautifully drawn and set a dark and mysterious tone as the story of Alice progresses. The pages turn frantically, as the pieces of this war are set into place. However, it is difficult to pick this issue up without prior context, and as with many installment-based stories, it is anticlimactic in that you must read the next issue to find out what happens. The story, while packed with plot, reads a little thin as there are many questions left to be answered.