A Dangerous Inheritance: A Novel of Tudor Rivals and the Secret of the Tower 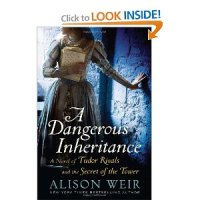 Uneasy Lies the Head That Might Wear the Crown

Many are familiar with the tragic story of Lady Jane Grey, the nine-day Queen of England who was beheaded for treason at the age of sixteen. Few people, however, know the equally tragic story of Jane’s younger sister, Lady Catherine, a princess who suffered the wrath and jealousy of her cousin, Queen Elizabeth I, primarily because of her position in the line of succession.

In A Dangerous Inheritance Weir cleverly tells the story of Catherine Grey, while at the same time telling the story of Kate Plantagenet, the bastard daughter of King Richard III. The lives of the two women, living in different centuries, intertwine as they both desperately try to solve the mystery as to what really happened to the two young boys known to history as the Princes in the Tower.

Weir takes a unique approach of telling the story by switching from first person with Catherine, to third person with Kate. She also offers a balanced portrayal of Richard III, the man thought by many to have murdered his nephew princes in order to steal their throne. While the reader is made aware of Richard’s more devious side, his daughter Kate sees him as a loving father and husband. In the end, both women realize that, because of their proximity to the crown, their fate is not their own.