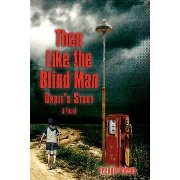 The Perfect Storm of Emotion, Violence, and Growing Up

Every once in awhile, you read a book in which every element fits together so perfectly that you just sit back in awe at the skill of the storyteller. Then Like the Blind Man is one of these books.

When nine-year-old Orbie is dropped off at his grandparents’ farm, he feels abandoned, lonely, and superior to the country folk around him. As the story unfolds, we learn of his father’s death and of his mother’s subsequent marriage to a violent, drunken man. We see his acceptance of his surroundings and their people. We discover his ongoing internal and external conflicts concerning his stepfather. We recognize his thorough and significant growth.

“But the thing that put the slice of worry permanently between Momma’s eyes and pointed out the path I was to take – the thing that sent the Devil to his grave – that was more than just a storm.”

Throughout the course of the story, Orbie deals with discrimination, domestic and sexual abuse, violence, religion, murder, death, love, forgiveness, the complexities of human nature, and so much more. Even with these deep themes, the book never loses the sense of wonder, passion, and fragmented understanding that comes with a child narrator.

Set primarily in rural Kentucky in the late 1950s, the story is filled with a sense of place. The entire narrative, not just the dialogue, is written in such a way that you cannot help but pronounce it in a particular accent. Despite its prevalence, this dialect never seems overwhelming or false. Important plot points are also tied to the setting, including the fate of a pair of ducks, access to medical care, and even the weather. Within this story, you never lose track of where or with whom you are.

The isolated, segregated environment echoes the constant, building tension between people. The entire story has a very specific and oppressive atmosphere that reminds me of standing in a dusty field seconds before a storm breaks.

The back of the book jacket says the story is “equal parts Hamlet and Huckleberry Finn.” That is not exaggeration or unwarranted praise. Then Like the Blind Man: Orbie’s Story grabs you from the very first page and carries you along, breathless and tense, until the very last, very satisfying sentence. Freddie Owens has created something special.