Eulogy given by our own Axie Barclay, mother of Achsah (pronounced Axa) and Aaron born September 21, 2012…

I don’t like public speaking. Luckily I took drama in college, though I really wish there was another occasion to use it. I’d like to start by thanking everyone. Rick and I both really appreciate the outpouring of love and sympathy that we’ve received from everyone, family, friends, the Sparrow NICU staff and people who barely know us. So thank you, for all that you’ve done and all that you may do for us in the future. And a special thank you to my bff, Jamie Jones, cuz even though she’s married, she’ll always be Jones to me. She has gone above and beyond in helping with everything and being there through all of this. She embodies what it is to be a best friend.

There were a lot of ways to approach this eulogy and believe me, I ran through quite a few of them. What can you say about someone you knew for twenty days? I mean, some insects live longer. Some dates feel longer (lol).

One quote I found that seemed to sum up a lot of the complex emotions that we all seemed to be feeling about this… whole ordeal …was from an academic study about parental grief. It said:

Children are not supposed to die…Parents expect to see their children grow and mature. Ultimately, parents expect to die and leave their children behind…This is the natural course of life events, the life cycle continuing as it should. The loss of a child is the loss of innocence, the death of the most vulnerable and dependent. The death of a child signifies the loss of the future, of hopes and dreams, of new strength, and of perfection. – 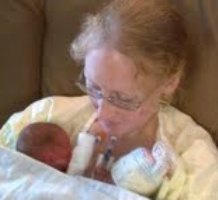 The loss of a child is… devastating. That’s the only word for it.

But while it is awful, and tearful, and cosmically, ridiculously unfair, one thing that kept nagging me was how happy she was; and how happy she made the people around her. Even though I’m sure some of her nurses would have preferred that she left her temp probe alone. J

so it seemed sort of morbid, let alone rather inappropriate, to dwell on how much we miss her and what a hole she left. You know that. That’s a given. It even seemed wrong to focus on how much we like to picture her with her great-grandfathers, who get to teach her all the things we wanted to.

Though I hope she doesn’t pick up my grandpa’s bedside manner in animal doctoring. Which, I’m sure, my grandmother will assure you, and Rick’s learning, left more than a bit to be desired.

Because she was so happy, such a light, brief as she was, I’d like to focus on that, remembering what made Achsah special to us, especially since so few here got to meet her. 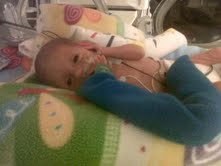 Our daughter, Achsah Anne-Elizabeth Barclay, born September 21st at 12:49 A.M., two pounds, one ounce, was full of surprises from the first. Rick and I didn’t find out about her until my third visit to the doctor, when they announced “twins!” And I replied “oh shit! Look again.”

Achsah, the one who hid, debuted in the world by surprising us. When they did the 20-week ultrasound we knew she’d be feisty because she’d hold still just long enough for the tech to focus the shot… but then would spasm and move. Like it was a game. While Aaron was content to sleep through most of the gestation, Achsah was always moving. Always pushing my ribs or making her opinion known about how long the mail route was taking that day. She was the one I always had to talk to, let her know that beating mom from the inside was not cool. She never listened… but there ya go. I think the only thing that lulled her was white noise, first from the backpack vacuum and then later in the hospital when they were running a saw next door. All the other babies were fussy, but she sawed logs right through it, like it was the most awesome thing in the world.

She needed that feisty attitude when she and her brother were born twelve weeks early. It also helped get her quickly from the ventilator to the c-pap to high flow oxygen. Her big personality along with her good looks won her many friends, though her squirming frustrated many of her nurses on occasion. Achsah was a handful from the get-go, with her own definite opinion about things, much in contrast to her brother Aaron, who only gets irritated when disturbed from his nap.

It’s amazing how many things you can learn about a baby in a short period of time. I started making a list, of things she liked, things I want to remember about her. Facts.

She liked to hang onto her wires, and remove them, as much as she liked hanging onto other things, like fingers, ventilator tubes, gauze, and temperature probe wires. She’d reach out and grab tight, as if she’d grab onto the world and ride it to the ground.

She liked to smile.

She had my hair.

She had my blood type.

She had my hands, and Rick’s nose and cheek bones.

She liked it when you held her feet. Tucked them up into her body. It calmed her down. 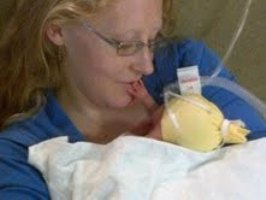 And when you held her, she liked it when you rubbed her back, whereas Aaron only likes it through the blanket or his diaper. It’s a thing with premies, their skin in highly sensitive so most prefer pressure to motion. Not her. She liked skin on skin and motion. She was almost always moving, always busy. As soon as the cpap mask came off and she could open her eyes, it seemed like she hardly ever closed them. She was interested in the world and wanted to be part of whatever was going on around her.

I think she would have had a sense of humor, of course after listening to me for seven months, who wouldn’t right? But sometimes she’d look up and smile, like there was a joke only she knew. She’d raise and lower her eyebrows when she napped, like she was skeptical or thinking hard about something.

And she was already a sucker for a dairy farmer. Though Rick and I joked that she better go after one with a day job when she got older.

Even when she didn’t feel good, Achsah was angry instead of lethargic and didn’t take any guff about things. She had her opinion. From day one. That was all there was to it.

Things I want to remember.

The loss of a child is… indescribable. I mean, there’s nothing to say. The whole thing is so out of sequence, so shocking. You lose your car keys, your mind, the other sock in the dryer. You’re not supposed to lose a baby. We were all looking forward to getting to know what kind of person Achsah would become, and I think that’s what I will miss the most. I’ll miss her smile, her expressive face. I’ll miss her first day of school and dropping her off at college, teaching her to ride a horse and taking her to the post office to buy her first book of stamps.

I loved getting to know this tiny, zesty little being, even for twenty days, those four hundred and fifty-eight hours, that were, for her, a lifetime. I just wish that I, that all of us, had been granted time to get to know her better.

Someone called her a bright, brief flash of light. And that’s what she was. Full of light, full of happiness. When this kind of thing happens, I think we all look for reasons or larger meanings behind it. While learning that meaning might be awhile in coming, and while I can’t speak for everyone, some things that I think Rick and I have learned in this is the importance of being kind to one another. Of laughing, even if you’re crying. And remembering to love each other, even when everything is going to shit.

Edith Wharton said; “There are two ways of spreading light: to be the candle or the mirror that reflects it.”

Achsah didn’t live long enough to be more than a candle. But if her passing has to mean something, then let it mean laughter. And loving. And being kind to each other. If Achsah was a candle, then, with her memory, let us be the mirror.

Thank you and I’m sorry for all our loss.