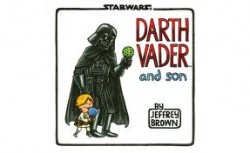 You would think that having The Force to back you up would make parenting easier. Darth Vader and Son is the Star Wars 3-1/2, where Darth Vader has to care for his young son Luke. Obviously, this is not canon, but it really doesn’t matter. This explores in a very comedic way what would have happened if Darth Vader had raised Luke. Almost every major Star Wars character makes an appearance, and it pays to pay attention to what is happening in the background. This is something every geek needs in their collection.