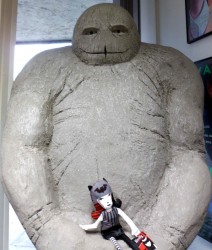 An enormous statue of comic book hero, Concrete, is guarding the entrance of Dark Horse, but I know enough about this local publisher to not find that weird.

This particular comic book character is beloved of the company’s owner and founder, Mike Richardson, and its subject was one of the comics the company first published when they opened shop in 1986. Concrete is a giant made of, well, you guessed it, and his brilliant brain lays impounded within the sexless lug of his body. His sensitive, wistful character strikes against the comic-book conventions of superhero strength and beauty.

So many of the characters within this publisher’s catalog— which includes Hellboy, Sin City, The Mask, Conan, as well as an extensive collection of manga—strike against that convention. As the nation’s third largest producer of comics (behind DC Comics and Marvel), Dark Horse seems to have its indie bases covered.

Discussing the world of comics with those who are knowledgeable about it often slams the conversation into an invisible wall. One party will fail to catch the barbed references and the other will be astounded by this astronomical ignorance. Lucky for me, Dark Horse publicity coordinator, Aub Driver, is happy to lead an infrequent reader of comics into that universe.

Driver likened his tenure within Dark Horse for the past two years to stepping back into his childhood affection for the world of comics. Some of the comics he reads as a necessity of a job within the comic book publisher, he enthusiastically recommends, such as The Goons, The Victories, Mind MGMT (“a crazy acid trip of a comic book”), and Black Beetle. The first comic within the later series happened to sell out last week, along Star Wars #1, Hellboy #1 and Hellboy #2.

So sales go in the insular world of comics and the offices within the Dark Horse headquarters are cluttered with enough merchandise and memorabilia of the industry to suggest just that. Fans of this genre are driven to acquire more and more of it. 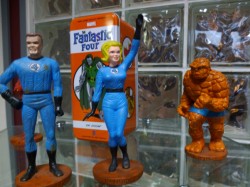 The path to publishing a comic book is a rather windy one that often spools from the book itself into other forms of entertainment. Why, for example, does Dark Horse have anything to do with Game of Thrones merchandise and how did Dark Horse end up publishing Star Wars comics? The question of whether the material is owned by the writer or by the publisher brings up an issue that has long-plagued comic writers and publishers. In standard fiction publishing, the creator of the work is expected to retain ownership, however, within comic book publishing, other options are explored. Dark Horse, for instance, both accepts original comics and seeks out the license to publish comics that have been previously published elsewhere.

Driver says that comics are especially wound into other forms of entertainment. “Movies capture an audience that comics can’t necessarily reach,” he said. Fans of the movie, video game, or T.V. series that Dark Horse finds an opportunity to buy the license to will patronize the comic book industry and buy merchandise. Each economic pursuit perpetuates another. The sale of comics, movies, video games, and merchandise all volleys back and forth between industries.

While the pitch process for a comic book is similar to pitching a book in “normal” publishing (the writer gets the book through acquisitions, then acquisitions pitches to the rest of the editorial staff), the production process is vastly different and involves artists, inkers, colorists, and letterers. All in all, the process takes about three to six months to complete and, in publicity, Driver spends a great deal of his time making sure that Dark Horse’s comics are heard about before and after the publication date.

When asked whether the move towards digital publishing had affected Dark Horse’s revenue, Driver responded that print sales were still driving their success.

“Digital sales are a percentage of what our physical sales are,” he said, offering that comic book fans might be driven to buy in print because of “the ritual” of that reading experience. 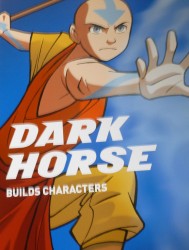 Whatever the reason behind comic book fans’ dedication to their genre, Dark Horse is making itself happy as the nation’s largest independent publisher of comics.

“Last year was one of our strongest years,” Driver said. “And there’s no sign that our numbers are dropping off.”