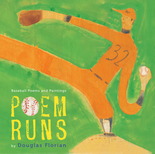 What could be better for literary sports fans than a book with baseball themed poems and paintings? Douglas Florian brings young readers fifteen action-packed poems in Poem Runs. All the parts of a game are covered, from warm-up to positions and even a poem about the umpire. As a lifelong Mets fan, former Little League shortstop and current coach, Florian knows baseball. His illustrations are done in gouache watercolors, oil pastels, colored pencils and pine tar on primed paper bags. His choice of colors invokes the feel and scents of playing on a sunny, dusty baseball diamond. The boys and girls on the team are endearing – the innocence of childhood is captured on the page in one-of-a-kind artwork. Some of the poems have lines that mimic the actions found in the words. The “Warm Up” poem instructs plays to “S T R E T C H out those muscles.” “Right Fielder” is a funny poem that features a girl who can’t run or catch but can pick the perfect daisy! Isn’t there always one daisy chain maker on the team? In his illustrations, Florian includes body movements unique to each position. The pitcher’s noodle arm winds up for a curveball. The flexible body of the short stop allows him to catch those line drives and pop-ups. The first baseman keeps her foot on the plate as she stretches out her arm to catch the ball. You’re out! There is a lot going on in this book, just like in a real game of baseball. Play ball!