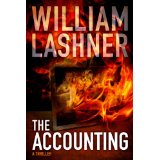 An Epic Story of Opportunistic Crime and it’s Frightening Consequences

Following the divorce of his parents, ten year old Jon suffers a dramatic change from privileged wealth to abject poverty. Bullied and teased in his new environment, he eventually becomes friends with two other boys. In their teens, they broke into the house of a dangerous drug dealer, thinking they had been ripped off and were owed some quality weed. Instead of finding the stash they sought, they stumbled across buckets of cash, hundreds of thousands for each. They agreed to hide it and not spend any for years. As the decades pass, they think they are in the clear. But they all find that the secret they share affects their lives and relationships. And eventually, the motorcycle gang they stole the cash from reappears.

William Lashner is a New York Times best-selling novelist whose crime novels include Blood and Bone, Fatal Flaw, and Hostile Witness. A former prosecutor with the Department of Justice and a graduate of the Iowa Writers’ Workshop, his work has sold worldwide and been translated into more than a dozen languages.

The fear and tension build from the start of the tale. Dangerous characters chasing Jon all over the country keep this thrilling story crackling with suspense. Altogether an enjoyable tale.