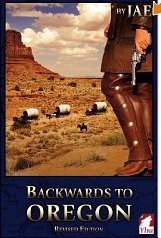 A Journey of Discovery and Love

Nora, known as Fleur by the patrons at the brothel, is not used to being treated like a respectable woman. Her identity is based on selling her body for money in order to take care of herself and her young daughter. When she meets Luke, Nora feels like she has found a man who understands and respects her. Luke has a huge secret – he is really a woman posing as a man, something that could get her killed in the 1850s. Luke has a dream to own land and run her own horse ranch in Oregon. She is prepared to leave Independence, Missouri in order to travel the 2,000 miles west. Yet Luke realizes that she’ll have almost no privacy to hide her secret and conceal her sexual preferences if she travels alone with a wagon train community. In order to blend in with the other settlers, Luke proposes to Nora. Theirs would be a marriage of convenience, a type of business deal. Both would benefit from the arrangement and nothing sexual would be expected (Nora doesn’t yet know about Luke’s real identity). As Luke and Nora get to know each other on the Oregon Trail, Luke realizes how rare it is to find someone who doesn’t judge based on stereotypes but rather gets to know a person based on their strength of character. As the two women fall in love, they face many challenges on their journey to Oregon. Find out how Nora reacts when she finally discovers Luke’s secret.

Jae, author of Backwards to Oregon, writes about two strong women who dare to dream bigger than the roles society has assigned for them. It is clear that Jae did plenty of research while writing her book. Readers will feel transported to the streets of Independence, Missouri and along the Oregon Trail as Luke and Nora’s wagon team travels the perilous roads. The author has a way with words. She describes places with such accuracy and her characters with such detail that her writing comes alive. Readers should have an open mind about love in order to fully enjoy this book. Luke and Nora must decide whether they can love each other in public or whether they must keep their love confined to private spaces. Luckily things are changing politically and legally. Backwards to Oregon is an excellent romance that comes at a time when same-sex couples are celebrating the recent changes in marriage laws around the United States.