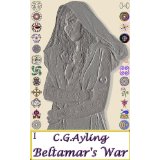 Malmaxa: Treacherous Friends, Ancient Enemies, and a Dream That Can Save Them All

C. G. Ayling’s Beltamar’s War is a captivating story that will leave you breathless until the end. Two competing but complimentary stories are told within the pages, one of warriors fighting against the Ancient Enemy and one of a family left at home, preparing for the pilgrimage to Malmaxa. It seems straightforward but soon the reader is entangled in the undercurrents of betrayal in a long-waged war and prophetic dreams that could spell the end, or beginning, of a new age in Malmaxa.

There is a steep learning curve in the first few chapters. There are a lot of characters introduced in the beginning and it is hard to keep them separate until their personality traits are revealed. The world building is complex but Ayling provides a glossary at the end to help readers learn the words of this new world. However, once the reader gets fully immersed in the story, it’s engaging.

Malmaxa is a complex world of rituals, history, and decorum, with a little mischief thrown in. Each of the characters struggle with internal demons whilst trying to keep true to the Immutable Laws. The depictions of the world are vivid and mysterious, from the multihued spines on the Segatto, to the symbolism of the Vision Quests, to Lineage Marks and the fear and terror that the groth and Grolem inflict. Readers will ask themselves questions about the identity and motive of the Ancient Enemy and will wonder how Liaju and Rethga are going to save the Seizen.

Beltamar’s War ends abruptly with the fate of the warriors still unknown. There are a lot of unanswered questions about the groth, the mysterious Overseeers and how Liaju’s vision is going to come true. Thankfully, The Pilgrimage (the sequel)  is out already so readers can continue on in the world of Malmaxa. Download a copy of Beltamar’s War if you love epic fantasy with twists, turns, complex characters and mysterious worlds.