Bob and Ray, Keener Than Most Persons 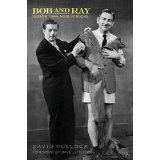 Bob and Ray were among the most interesting and innovative comedians in radio and television. Because Ray Goulding died in 1990, younger readers of this review may not recognize their names. The duo started out as largely improvisational comedians on Boston radio. Inevitably they migrated to New York City, and appeared on virtually all of the major radio stations in New York, as well as several TV network shows.

Pollock does a good job of capturing the unique interplay between the two. They created all sorts of characters, voicing most themselves, with occasional assists from various female actresses, notably Audrey Meadows. Many of these characters were based on existing radio shows, whose titles Bob and Ray inverted or subverted. Mary Noble Backstage Wife, became Mary Backstayge, Noble Wife, for example. Although Bob Elliott did a Harry Truman imitation, most of the duo’s humor was dry, New England style humor that annihilated stuffed shirts, fools and egomaniacs. The continued success of the act brought Bob and Ray lucrative work in numerous advertising campaigns, notably their spots for Piels Beer. Their many TV guest shots, a Broadway show and numerous awards in the 1980’s culminated their career. During the last twelve years of their tenure, Ray Goulding was an early patient of kidney dialysis, a matter essentially kept hidden in the industry.

Occasionally the endless stream of colleagues and family histories gets in the way of the flow of the story, but this book does a great service in telling the story of these notable actors, writers and comics.