“By putting users and content owners in control of their data, Glide was also challenging illegal content sharing and the emerging data mining industry led by Google and Facebook. But the dangers associated with data mining were little understood by the general public at that time.” 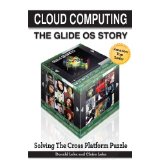 Glide On By: The Revolution of Cloud Computing

Cloud computing? Huh? What’s that? If you have an iPhone, you know about iCloud. Perhaps, if you use Gmail, you know about Google’s various internet-based storage and sharing applications. But if you’re like most of us and somewhere between a plebian and a Luddite, the intricacies of cloud computing probably escape you. So here’s a simple primer: cloud computing involves sharing data from one device to another (too many, in fact) in a variety of formats and is often internet-based. Because “cloud computing” as a phrase is not generally part of the vernacular of us plebs, most people aren’t particularly aware of the intricacies of its conception and design or the hard work that goes into making a tech company work. In Cloud Computing – The Glide OS Story, TransMedia founder and CEO Donald Leka, the creator of the Glide OS, and his wife, Claire Leka, strive to shed some light on TransMedia’s revolutionary—but not that widely known—Glide operating system.

Writing in a relaxed, conversational voice, the Lekas share Glide’s story from its conception (and their son’s part in its aesthetic and practical design) to the present. You’ll travel with Donald Leka to tech conferences, read excerpts of Glide reviews, and learn of the hard work Leka has done to promote an entirely new and unique method of computing to a world that hungers for change—but within its comfort zone. Cloud Computing also demonstrates the effect of the 2008 global financial meltdown on the tech industry and the resulting hurdles the Lekas have had to overcome.

While some of the more in-depth descriptions of Glide’s user interface weren’t as clear as I would have liked and the images in the PDF eBook were grainy and didn’t represent Glide as well as they might have, overall, I was left with a sense that the Glide OS is a well-planned, well-designed, and ever-evolving OS that most of us should check out. If that’s not a recommendation of the book, well, I don’t know what is.