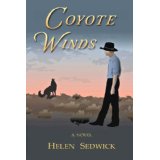 A Life Lived Over

Here’s a story that rolls along so fast it’s hard to keep up with it. Lively, entertaining, humorous, researched with more accuracy and vigor than many juvenile books, and all packed into 224 pages. I enjoyed both stories – modern-day teenager Andy and his late grandfather, Myles, a teenager 70 years earlier. The book has supplementary strands as well as the two primary threads: the coyote (not the helpless pup suggested in the cover blurb), the one-liner ‘groaners,’ the 19th century settlement of rural Colorado and the Depression.

Helen Sedwick writes at a cracking place and has an excellent ear for dialogue but I think the book would benefit from a little streamlining. First, Grandpa Myles needn’t have died and left a mysterious box. Why couldn’t he tell his stories to Andy as he recovers from a football/baseball accident? Andy could be fascinated by the memories, rather than bored by them. The box element is contrived. And back-tracking to the great-grandparent generation is prolix.

The coyote, whether seen as Myles’ animal rights protest, or a way to introduce the different attitudes to farming and rural life, is not brought forward to present day. This would have made better sense. Also, Ro is sometimes anthropomorphized which doesn’t quit fit. Some of the major episodes are almost glossed over. If a couple of the less central episodes were removed, teenagers could empathize and/or identify with lengthier accounts (and subsequent repercussions) of the tornado experience, the schools closing, Clare winning the writing contest and the driving lesson. And Andy’s drive to Colorado is written at a different pace than the rest of the book.

Two other points: Betsy would be shocked into silence if approached by the one-liner jokes at the bus stop. On a more serious note, Sedwick seemingly can’t decide what to call the adults. For example, Andy refers to Lionel either by name or as ‘the father’ but Moser and Herbert needs adjusting.

This book is crammed with good information that is eagerly shared. Someone Andy’s age, who is unafraid to give an opinion, would make an ideal and helpful reviewer.