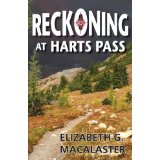 International Thriller for the Modern Age

Reckoning at Harts Pass is a rollicking fun read. The fast-paced and very timely thriller tracks an international terrorist plot to bring a dirty bomb into the United States through the not-so-secure U.S-Canadian border. Timing and circumstance lead to recently-retired FBI agent Luke Chamberlain having to push aside his bitterness toward the Agency and foil the plot – all while hiking the Pacific Crest Trail.

Elizabeth Macalaster has written an exciting book that is a true page-turner. She elegantly weaves the lives of men from Russia, Pakistan, Canada and the U.S. into a tapestry of national pride, religious beliefs, personal demons…and ultimately, revenge. While diving into complicated matters of the FBI, Taliban and Cold War, Macalaster uses a light touch, explaining difficult topics with clear, simple language. She creates interesting, complex characters that many readers would likely want to meet again.

Macalaster does a beautiful job bringing together Chamberlain’s strained family life, American Indian background, bitterness toward the FBI and his journey to reconcile all these inner struggles on the Pacific Crest Trail. The Trail plays a dual role in the book, serving as the backbone of the story as well as an intriguing character. Stretching from southern California to the U.S-Canadian border, it is a diverse land, ranging from arid deserts to snowy mountains, and Macalaster expertly portrays the variety of the land and climate, as well as all the fascinating people Chamberlain meets along the trail.

Despite the complex mosaic of characters and settings, the plot moves along quickly, which is to be commended. However, it seems to move along a little too quickly at times. Readers may have enjoyed a little more “tease” in some places to build suspense as various plots reveal themselves and characters march toward the ultimate confrontation. But then again, the quick pace also makes Reckoning the hard-to-put-down, loan-it-to-your-friends fun read that it is. Don’t miss this one!