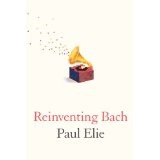 Elie is Bach in Prose

Paul Elie’s Reinventing Bach weaves together scenes from Bach’s life, stories of 20th Century landmark Bach recordings (Schweitzer and Casals in the 1930s; Stokowski’s Toccata and Fugue in D Minor for Fantasia; Gould’s 1955 Goldberg Variations and others), snapshots of the history of recording technology, and dozens of other Bach encounters, from Wendy Carlos’ Switched on Bach to Jerusalem, 1991; as tensions mount over the Iraq situation, Isaac Stern plays Bach wearing a gas mask.

The range of Elie’s knowledge is amazing, and his writing is consistently engaging. Best of all, he makes us feel like we’re really present at these events. We feel the cold air of December 1935 in a London church as Schweitzer records Bach organ works onto wax cylinders. We hear Casals own words, “That [the cello] is the most wonderful instrument I have ever heard. That is what I want to play.” He was 8 years old. We see Joshua Bell, in jeans and a T-shirt, on a busy Washington D.C. street, playing Bach’s Chaconne: he earned thirty-two dollars that day.

Rich in detail and superbly written, any lover of Bach will find this a fascinating read.