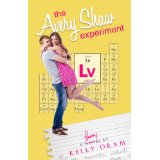 Science Club Has Never Been So Fun

Aiden Kennedy has been Avery Shaw’s best friend since birth and their moms believed they would end up together. So imagine the bomb that hits the Kennedy residence when Aiden asks for a little bit of space. Avery Shaw loves him and his request shatters her fragile heart. Without Aiden, Avery is forced to find a way to continue working on her science fair project, and living her life, without him. Cue hot guy here and we have a roller-coaster of a ride.

Grayson Kennedy is the older, popular, athletic version of Aiden. With their social circles so far apart, it is a shock that he becomes Avery’s partner for the science fair. The objective is to cure Avery’s broken heart through the seven stages of grief by whatever means the charming Grayson finds necessary. What’s in it for him? Extra credit.

“To really grasp the full extent of the shock I experienced when Aiden Kennedy broke my heart, you need to understand the unusual circumstances of our relationship up until that point.”

Page one is an instant thrill. Avery Shaw has a sharp wit and can whip out a snappy line. As an integral part of the Science Club, she is initially described as the stereotypical geek girl from the loser table which makes for a fun plot. The same goes for Grayson. As the swoon-worthy athlete who is failing science, Avery begins by labeling him much like he labels her. Grayson views Avery as a painfully shy introvert in need of his rescuing. Avery perceives Grayson as the sexy, but off-limits jock at the top of the social food chain and bottom of academics. Alternating chapters provide a different look at both characters and readers also get to see inside both of their minds. Switching between Avery and Grayson’s voices highlights their individuality and breaks down stereotypes. Although both have strong voices, there are instances where the novel could have benefited from deeper characterization.

The plot moves quickly and the main characters develop believable chemistry. Avery and Grayson’s character growth and connection to each other is realistic. For such a short story, there is unlimited fun, feel-good, steamy adventure and a useful lesson in Newton’s first law of motion.