The Everafter Chronicles: Reign of the Night Creatures 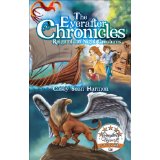 Upon encountering this new world, the children must quickly learn to trust their feelings and intuition, to suspend disbelief and reason and to draw on unexpected resources for survival. As they approach the world with fresh perspective, the children begin maturing and taking on increased responsibility. Their sibling camaraderie deepens as they overcome one challenge after another and James gradually steps into manhood while protecting his sisters.

The entertaining plot borrows heavily from C.S. Lewis’ Chronicles of Narnia with one of the children even named Susan and the steady presence of a half-lion creature assisting in the journey. The children also occasionally use formal British language inconsistent with the typically casual American discourse.

Harmon depicts spiritual truths in a more cursory, hollow manner than did Lewis, with nothing particularly Christian about them. Nonetheless, he provides a timely challenge to modernist thinking while pitting light against darkness and raising questions of providence and self-determination.

Though the story lacks gravity in addressing such themes, it has other unexpectedly morbid moments, without which it could likely be classified as children’s rather than young adult literature. Most of its content is refreshingly light, however, in comparison to most current mainstream fantasy fiction, and its moderate level of suspense keeps readers moving along quickly.