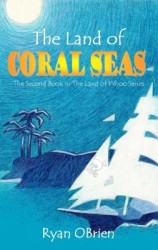 Adventure on the High Seas (and Deep Underground)

Michael Henry has always known that he was adopted. But recently he discovered that he is, quite literally, not of this world. In Ryan O’Brien’s The Land of Coral Seas: The Second Book in The Land of Whoo Series, Michael Henry is again drawn into the land of his birth after receiving a desperate message from King Vincent. The King’s daughter is being held under threat of death by an evil wizard wishing to destroy the King and take power for himself.

With the help of his best friend Savannah and characters first introduced in the series’ eponymous first installation, Michael Henry travels to this alternate world and begins preparations to save Princess Ariana from certain death.

While the novel’s occasionally complicated plot and character relationships would most likely be better understood by someone who had read the first book, O’Brien has created a story that pits good against evil in a manner that, while not wholly original, is consistently fun to read. The Land of Coral Seas encourages its readers to push forward, chapter after chapter, to find out if Michael Henry will be victorious or if the wizard will prevail.