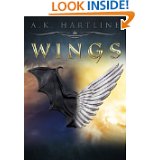 There’s a Whole Other World Out There

The Preface sets the tone of a sinister plot and the excitement of a horror-filled tale. Unapologetically, the story begins with a 10-year old boy named Heath Hatcher who meets a strange and magical young girl on the side of an overflowing rushing creek. The story follows Heath’s life as he starts a band, goes off to college, quits, gets a job and meets Becky Thorne as they work together in a retail warehouse. But John Mcready isn’t going to allow their budding relationship to continue because he wants Becky for himself. He actively tries to sabotage Heath and Becky’s relationship but gets fired and beat up by Heath. Stephen shows up then and becomes blood brothers with John, giving him immortality, strength and a new life as a vampire. While training John as a Wing, Stephen begins his plot for the Master, converting others to further their cause.

While Wings starts out as a soft Young Adult novel or a sweet Romance, it turns into a wildly vivid and intricate tale of the fantastical vampire world. Many plot twists abound, taking readers on sometimes unnecessary tangents that are unrelated to the story and lack direction and purpose. The writing is uneven and often choppy in its delivery. However, short chapters and strong character development move the story along quickly. It’s a worthy tale that creatively offers spontaneity, thrills and suspense. As more and more characters are introduced, readers will find themselves caring about and even rooting for some and booing others as each page quickly turns. A good editor would make this story flow better and keep it on track. But in the end, this is an entertaining read that will leave readers waiting for the sequel.