A World Without Angels 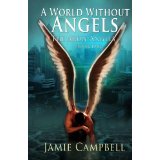 What Is It Like In a World Without Angels?

The apocalypse is everywhere. Mankind is killing each other over cans of food and a place to sleep. Fires ravage every city across America. Otherworld creatures capture and kill humans for fun. It’s all just a typical day in Aron, the fictional city in Jamie Campbell’s A World Without Angels.

When 17-year-old Leila Loudon sees a man fall to earth she is shocked, but knows she must help him. But when she finds out his name is Jerome, and he is an angel who has fallen from heaven, she can’t believe it. Soon each shares life isn’t great in their hometowns, Aron and Heaven, and they discover the same malicious force is behind the trouble in both locations. Demons have been killing guardian angels, leaving humans unprotected and violent against one another.

While out scavenging for supplies, Jerome and Leila stumble across a prophecy that indicates there may be someone alive in Aron that could unite Heaven and earth, and defeat the demonic forces once and for all. Soon they are flying around the world following clues and unraveling riddles, ever aware that danger is quickly closing in on them.

A World Without Angels tells a story that has been told before. Angels and demons fighting one another, with earth caught in the middle. What sets this book apart from the masses is how well it is written. Jamie Campbell has a way of writing that makes the world come to life. The characters feel like their struggles are those of a best friend. When she writes of Heaven, the reader can picture every stone in the street.

This book is not without flaws. Campbell has a tendency to rush the story along using forced dialogue. It isn’t uncommon for Jerome and Leila to have an impromptu conversation in the middle of everything to get to the next minor plot point, instead of letting things happen naturally. Although it happens often, it doesn’t take long for the reader to tune it out and enjoy the story for what it is, a fantastic tale of two people against the world.