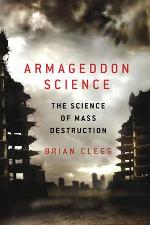 Armageddon Science is a broad-brush survey of the ways that humankind can annihilate itself or be annihilated. Potential causes range from the CERN Large Hadron Collider in Switzerland to nuclear power, climate change, natural disasters and nanotechnology – the manufacture and use of microscopic-level devices. Clegg explores the social dimension of such artificial devices, including the possibility that, in a “Terminator”-like scenario, such a technology might go out of control. He even explores the possibility that technology-enhanced humans might replace ordinary “humans” as we know them. Throughout, Clegg maintains a strong faith in the net benefits of science and technology and in our ability to control their dangers.

Clegg begins strong, with discussions of the CERN collider and atomic and nuclear technology that are informative without being heavy-handed. Unfortunately, as we move deeper into the book, Clegg focuses progressively less on science. Topics multiply, discussions rely more on recitation of past events, or become shorter and more superficial. Eventually, it seemed to this reviewer as if the writer himself had lost any real interest in his subject. All but the least informed readers are likely to, as well.