Brush of the Gods 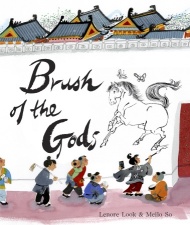 A Colorful Biography of Wu Daozi

One of the three Chinese sages, Wu Daozi of the T’ang Dynasty is revered as China’s greatest Painter. He was said to paint so quickly that his sleeves seemed to fly. Though much of his body of work has since been destroyed, he lives on as a Legend. Lenore Look uses translations of T’ang poetry and essays to construct her portrait of this man’s life as truthfully as possible in Brush of the Gods. Daozi’s story lends itself easily to children’s literature because of the variety of wonderful paintings her created and because of the story of his disappearance.

This biography is illustrated by Meilo So in a style respectful to Wu Daozi’s paintings. Though Wu Daozi used very little color in his work, Meilo So’s pictures vibrantly and colorfully bring Daozi’s world, the T’ang Dynasty, to life. Using calligraphy and water colors, Meilo So paints the working class, Monks, emperors and the poor. One particularly complex page is centered by a strip of wavy blue fabric. Though it is not mentioned in the text, it looks like it could be the bolt of silk Daozi painted the landscape of the Jialing River on to for Emperor Xuanzong, his greatest admirer.

“With one eye wide open, the other in a dream, he painted so much that he knew not whether the sun was up or down or whether he was standing or sitting.”

Lenore Look tells a wonderful story of a child learning calligraphy from Buddhist Monks (which were many of Daozi’s subjects) and discovers that his pen has a mind of its own. As his skill grows through practice, his pictures also take on lives of their own until he is able to draw his way to Paradise. Though Daozi’s painted paradise was destroyed many years ago, Meilo So’s version of it is breathtaking to behold.