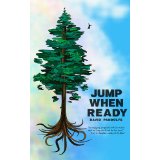 Mortality. Yikes: heavy stuff. The sort of heavy stuff that most of us don’t really want to think about because it’s scary and depressing and unpleasant, but also something heavy that’s utterly inevitable and part of everyone’s life. Everyone has different views of what happens after we die, some more pleasant than others. But we really don’t know. In Jump When Ready, author David Pandolfe provides his take on the afterlife: an uplifting but not cliché vision.

When 14-year-old Henry drowns in a freak accident, he’s transported to a realm that can best be considered between-lives. In this realm, he meets a variety of characters roughly his own age, each with their own tragic backstory, each in the process of transitioning from their last life to the one that lies ahead. While trying to process his own death and the general consensus that he did away with himself, Henry’s older sister Bethany is abducted. Using his ability to communicate with the living, and the similar powers of some of his fellow departed friends, Henry undertakes a mission to save his sister at all costs.

While in description the plot may seem a bit contrived, Jump When Ready is a well-written, entertaining, and thought-provoking story about life, family, love, and what really happens to us — and our loved ones — when we die. It’s written in a conversational, casual and gripping voice. One can’t help but feel for Henry. His confusion comes across as very real, as does his frustration at the seeming futility of trying to help his sister after she’s kidnapped.

Whether you’re 14 or 24, this book is a fun read with endearing characters and a quick-moving plot. Jump When Ready is not a book to miss — especially not at a price point of $2.99. Pick it up. You won’t regret it.