“The more familiar you become with the way things are, the more comfortable you will be.” 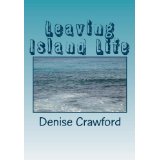 Leaving Island Life by Denise Crawford explores the author’s choice to leave the island paradise where she was born to experience the wider world. Crawford was born on the island of Anguilla, in the Leeward Islands of the Caribbean. Through the course of the narrative, she delves into the mindset of the culture she grew up in and explores her wanderlust and desire to live in America. She eventually leaves the island to live in America. The remainder of the book chronicles her various jobs, experience with different cultures, attempts at college, housing difficulties, travel, time living and working abroad, and legal troubles over a job and housing, until she finally decides to return to the island of her birth.

The book reads well and is an exhaustive account of the author’s experience. She tells a detailed story, though a meandering one. For a memoir, it lacks a driving force and cohesive central idea that leads the reader to a satisfying conclusion. Vague, generic complaints from the author’s former coworkers, who are vaguely described at best, may leave the reader a little cold. She also tends to portray an overly innocent and idealized version of island people, while Americans and British come across as self-absorbed, materialistic con artists.

The strength of this book is the voice. Crawford has a distinctly authentic Caribbean style, which lends uniqueness to the storytelling. Many of the weaknesses in Leaving Island Life come from over-simplification and poor narrative choices regarding character and setting. The author uses a very telling voice, without paying much attention to developing narrative tension or complex characters. For example, it’s hard to “see” the restaurant where she works or the vacant eyes of highly medicated employees and it is hard to “hear” the clatter of plates. The narrative would have been much improved if Crawford had paid attention to small, sensory details, which would have made the story seem less a loosely connected series of events, linked only by how the author felt about them and ways they compared to her romanticized version of her Caribbean home.

While this is easy to pick up and read on a plane, readers may find it lacks a certain central drive, overall cohesiveness and attention to detail that makes many other memoirs so, well, memorable.