Q & A with Author Maggie Oman Shannon for Crafting Calm

Interview Questions with Maggie Oman Shannon for Crafting Calm: Projects and Practices for Creativity and Contemplation
Compliments of Viva Editions 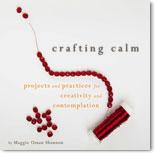 How did you come up with the idea for the book? In 2001 my second book, The Way We Pray: Prayer Practices from Around the World, was published; and I had really loved researching and writing about such a spectrum of spiritual practices (there were 50 in the book, many of which were creative). I realized that many of the crafting/creative activities I had naturally been drawn to were in fact being used by me as a form of spiritual reflection or practice, and so I continued to explore, expand, and add to them…Crafting Calm came out of a desire to share these passions with others and let them know how helpful they’d been in my life.

It seems like crafting and creating is the reason why you are a mother and a wife and a minister at a Unity church. Can you tell us that story? In my book signings, I love to show one of my “treasure maps”—a collage that shows one’s dreams and goals—to show people how powerful they can be. The one I show is one I did in 1994, which depicted landmarks of San Francisco as well as a couple walking on a beach. I did it as a single woman living in Indianapolis, when I desperately wanted to move to San Francisco. I incorporated that treasure map into my prayer and meditation time—and four months later, I got a job offer in the Bay Area! Since moving to San Francisco in 1995, all my dreams have come true, including getting married, becoming a mother, becoming an author, and becoming a minister. So yes, my crafting and creating has a direct link to the life I have crafted and created…and I continue to use crafting and creative activities as a form of reflection and incentive as I move forward.

What are the benefits of crafting with kids? There are very tangible benefits to crafting with kids: Developmental psychologists report that simple crafts and handmade projects provide both short- and long-term benefits to a child’s emotional, social, spiritual, and cognitive development. In addition to that, it provides such a lovely way to be with your child…to understand more about their natural impulses, and to appreciate their unique creative sense. If one has been socialized to not think of oneself as creative—and sadly, that’s true for most adults—being with a child while crafting can help us to remember that freedom and joy that we once had when creating and inspire us to do it again.

How does crafting, such as knitting, help alleviate free-floating feelings of stress? The biggest way that crafting can help with feelings of stress is that it distracts you in a positive way from whatever is causing you stress. Crafting and creating get you into the present moment—they can be a powerful “present-moment practice.” When you are working with materials that you love or that bring you delight, you are switching to another emotional gear…plus, crafting something that never existed before can be extremely empowering. (I will underscore my comment “working with materials that you love”—as I mention in the book, I was a frustrated and failed knitter; for me, knitting caused stress! But not every craft is for everybody…it’s important to find the ones you can happily “lose yourself” in.)

What is the most interesting question you have been asked on your book tour for Crafting Calm? At one of my book signings, a man was very insistent and pressed me for my “point”—he wanted to know why I wrote the book.  At the heart of it, I told him, it’s because we live in a world that desperately needs the gifts and positive contributions of everyone. In this 21st century, we no longer have the luxury of thinking we’re “not creative”—we are, every single person is, and we need everyone’s creative gifts to address all the need of this world. Crafting as a spiritual practice keeps us in touch with that inherent creativity, refills us, inspires us—and if each of us were to operate in our daily lives from that sense of creativity, fullness, and inspiration…well, just think what the world could look like!

Do you think your daughter will be a crafter? Though she just turned 10, my daughter is a crafter, and inventor, and creative free spirit. I am constantly inspired by, amazed by, and sometimes amused by her creativity…which recently has ranged from cutting out black mustache shapes and putting them all over her wall to crafting a “zipline” in our living room for her stuffed animals!

The word shrine comes from a Latin root meaning “case, chest,” so, technically speaking, the elements of your shrine should be encased or contained in some way. You can use breath-mint tins or pillboxes for your shrine, whatever will hold the small objects you want to include in it. The question to consider is: What will bring you back to center when you look at or touch it—what will bring you back to the Divine?

What is your favorite way to “craft calm?” My favorite ways to “craft calm” continue to be making treasure maps; making prayer beads (I co-wrote a book on making personal prayer beads titled A String and a Prayer: How to Make and Use Prayer Beads); keeping a personal holy book; and more! I continue to take the occasional craft class to try new approaches and add new practices; not all of them turn out to be “my thing,” but it’s just as useful to know what you don’t want to pursue as it is what you do. The important thing is to try, explore, discover, play!

What do you suggest for people who don’t consider themselves creative? What I just said in response to the last question—to try, explore, discover, play! To let yourself be a child again, a beginner.  And that might literally mean buying fingerpaints and just letting yourself be with the colors…to notice what colors you’re drawn to, what the paints feel like on your fingers, the shapes you’re able to make. Start at the beginning if you need to just experience the joy of color! From there, consider how you naturally learn things—visually? Through listening? Kinetically, through your hands? That might give you a clue as to where to start your explorations.  For instance, if you’re highly visual—as I am—then activities such as prayer beads, treasure maps, or visual journaling might be the way to go. If you like to work with your hands, then consider working with clay, gardening, baking bread. I think if we work with our natural proclivities it’s easier to tap into our inherent creativity, rather than trying to force a particular craft. There are many crafts I can’t do and don’t want to do (I already mentioned knitting, and there are a few more on that list!)—and no doubt that’s true for all of us. And that’s okay! Be creative in the way that you are designed to be…

You mention making prayer shawls and other things for people who are ill. What are some of the ways we can brighten the lives of others with crafting for spiritual purposes? The possibilities for brightening the lives of others through crafting as a spiritual practice are infinite, and can touch every sense—you can craft things that another person can eat (such as bread), smell (such as sacred bath salts or anointing oils), listen to (such as a tabletop fountain or recording of music and song), look at (such as prayer beads or a painting), feel and touch (such as an affirmation blanket or prayer rock). A number of the craftspeople whose stories are in Crafting Calm talk about the sense that their actual love, positive energy or prayers are infused into the item they make for another. And isn’t that a wonderful idea to hold as a possibility—that not only might we be touching another’s heart with our handmade gift, but also giving them something that literally holds our love and prayers for them?

Rev. Maggie Oman Shannon, M.A., is an interfaith minister, spiritual director, workshop and retreat facilitator, and author of five books: Prayers for Healing (Conari Press, 1997); The Way We Pray: Prayer Practices from Around the World (Conari Press, 2001); A String and a Prayer: How to Make and Use Prayer Beads (co-author; Red Wheel/Weiser, 2002); One God, Shared Hope (Red Wheel/Weiser, 2003); and her latest, Prayers for Hope and Comfort (Conari Press, 2008). In 2000, Oman Shannon founded The New Story, a coaching and consulting business focused on helping people create deeper meaning in their lives.

The former editor of three national magazines, including The Saturday Evening Post, Oman Shannon also served as Director of Marketing for the Institute of Noetic Sciences. Her writing has appeared in publications including Utne Reader and Beliefnet.com; and her work has been featured in publications ranging from the Miami Herald to Spirituality and Health magazine. She has taught workshops at venues including California Pacific Medical Center’s Institute for Health and Healing and Chautauqua Institution in Chautauqua, New York.

In addition to being a certified life coach, Oman Shannon completed the three-year training program of the Spiritual Directors Institute at Mercy Center in Burlingame, California. A graduate of Smith College, Oman Shannon also holds an M.A. degree in Culture and Spirituality from Holy Names University. She graduated from Manhattan’s One Spirit Interfaith Seminary in June 2010.

Oman Shannon lives in San Francisco with her husband and 7-year-old daughter.