“The whole event will illuminate what has been a covert foregone conclusion for many years: my complete ineptitude for living.” 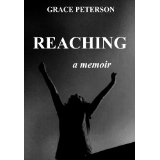 This memoir centers on author Grace Peterson’s psychological damage from life with a dysfunctional family and an abusive “therapist.” The story is not presented as “creative nonfiction” but as truthful as the author’s perspective permits. However, the work is structured like a story, with a prologue that sets the tone and a narrative with main characters and a satisfying resolution.

The story begins in the prologue during an earthquake. The author is a young mother who is forced to realize that she needs help. This sets the tone for the book. The story launches into an account of the narrator’s dysfunctional early years, including tales of abuse. The author refers to family members as “the mother,” “the father,” and “the sisters,” indicating a strange detachment. “The parents” divorce, “the mother” moves to Hawaii and marries “the stepfather” who is abusive, and “the mother” sends the girls back to the mainland and their birth father. The book follows the narrator through her high school relationships and experimentation with drugs and sex. Peterson is excellent at capturing the zeitgeist: the Watergate hearings, “Jaws” and the “energy crisis” that were the background noise—this was a time when kids were expendable, when the adults partied upstairs while the kids played in the basement. Some portions jump out, like when the narrator thinks of her best friend. “I have enough anger in me to kill you,” she thinks. Peterson is plagued by panic attacks and bad dreams. As an adult, she has nightmares she’ll harm her kids and finally seeks help from a fanatical and abusive “therapist.”

I began reading with skepticism, seeing this as just another confessional, but the prose grabbed hold. Peterson is adept at seeing the unique in the mundane. Maybe the abuse is also a thread in the cultural fabric which draws the writer to healing through her writing.