A Chair Between the Rails 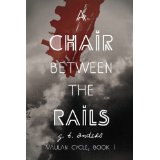 A Chair Between the Rails Confounds and Amazes

A Chair Between the Rails, the first book in the Vaulan Cycle by author G. T. Anders, tells the story of James Feckidee. James was raised by his Uncle Phil, a brilliant man and lover of the poet William Blake. When his Uncle passes away, James travels with his son to pay his respects at the funeral. However, when they stop for gas James’ life changes. The attendant is an older gentleman who takes a special interest in James’ son Austin. While looking at photos of his Uncle Phil, James recognizes the man from the gas station. He doesn’t appear to have aged a day in over 50 years. Upon arriving home later that evening James is met by another surprise, an enormous monster has taken hold outside his home and is trying to get in. With the help of James’ good friend Matt, he and Austin escape alive. Soon the trio is driving across country meeting friends, discovering beauty and finding answers to all James’ questions.

Author G. T. Anders is gifted in coming up with brilliant ideas. A Chair Between the Rails combines immortality, monsters, love, adventure and literature all into an interesting story. Anders’ greatest strength is his ability to create characters that are fun. In the span of a few sentences the reader is interested in James’ life, Austin’s eccentricity and Matt’s humility and wisdom. By enthralling readers with captivating characters, Anders is able to devote a majority of the book to telling the story.

Despite excellent character development and a great story idea, Anders has a tendency to rattle on too long. Most of the book is written in stream of consciousness, a style difficult for even the most seasoned of writers. Anders also moves in and out of present and past tense without delineation, leaving readers confused as to when and where they are. These two things combine to make a somewhat challenging read.

Although there are some passages that are tough to get through, perseverance is rewarded. A Chair Between the Rails will delight and surprise readers page after page and help them view reality in a whole new way.