“I hated what I was becoming and wanted to die.” 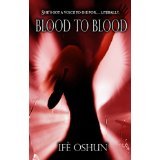 Blood to Blood by Ifè Oshun is an extraordinary book for teens. The author dedicates this book to her mother and this isn’t a coincidence. Who we become in many ways is determined by our genes. The young heroine of this novel, sixteen year-old Angelica, isn’t an exception. She has a beautiful voice and wants to be a pop star. As a member of the Kat Trio band she is about to sign their first album deal. But first she must tell her mom.

Angelica is simultaneously excited and horrified at her mom’s reaction. She is scared of her mom’s wrath when she shares the news because Angelica has inherited from her parents other “unusual” abilities. She is an immortal heir of so called “Fallen Angels” and the family has a very strict rule against publicity. This is especially relevant now that Angelica, whose full name is Angelica Isis Clarissa Brown, is also going through The Change. She transforms into a blood-drinking Shimshana. As a newborn immortal she is unstable and has an abnormal appetite for blood. As a result, Angelica is very dangerous to be around. Even her friends could easily become her prey. On top of that, it seems that her voice is now so powerful that people may be killed when she sings.

The immortal officials, including her mom, are worried by Angelica’s abilities. According to the immortal society Law, Angelica could be destroyed if she doesn’t learn to manage her temper. To remain alive, Angelica must pass the Abilities Showcase, the Character Gauge and the Vampiric Reaction Test at the Maha party which is obligatory for all newly transformed immortals.

It will surprise readers to find out who helps this blood-thirsty Angel make it through these tasks. It does seem that Angelica drinks too much blood even for a vampiric creature. But Ifè Oshun has some interesting ideas on origins of vampires and how an immortal human society could operate and adjust to the mortal world. You’ll find many “Whoas” in this book and you’ll probably exclaim them aloud too.