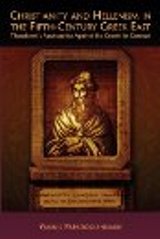 Last Days of Christianity and Hellenism

The Middle East is at the crossroads of tradition, culture, and religion. It is the birthplace of the major religions that count over half of the world’s population as its followers. The area gave rise to written language, poetry, and modern warfare. It has been wracked by violence for a long portion of its existence. It sits on the edge of east and west. In this book we get to examine one of the last major works to go against paganism – the belief in many gods – by one of Christianity’s great early writers. ||The author takes the reader on a journey through the 5th century Middle East, explaining how people lived, learned and got along with each other. It was a much more convoluted place, having a structure that was not a dichotomy between black and white, but a mixture of gray. Also it was beginning the transition of Christianity and Hellenism. Could the two of them get along and be one in the same, or would they have to go their separate paths? This is a book that bridges that divide.