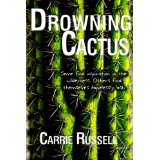 Gordon Burstein is a man in trouble, without job, friends or money. When he drops out of college to pursue his love of outdoors, his roommates abandon him and his parents refuse to support his lifestyle. Instead of returning to his native New Jersey, Gordon elects to stay on in New Mexico. He is employed by artist and butcher of cacti, Rosa Vida, or Rosa Muerte, born Rebecca Grossman, who makes cactus sculptures. Rosa mutilates herself in the same way she does her cacti. Gordon also “self-mutilates,” preferring the desert to humans. On one of his treks through the desert he looks for cacti to steal for Rosa. Instead, Gordon comes back with two children who hide in his truck bed while he digs up the plants. Rather than take them to the police, he abandons the cactus in the middle of the highway. The cactus theft explodes in the media. Gordon is called an eco-hero and an eco-terrorist.

Moira, another damaged character in the story, is cut out of the nonprofit gardening organization for needy kids that she founded. The “prickly and solitary” souls of Gordon and Moira fall in love over the phone as he leads her through the impossible mission of making cactus bloom in damp Massachusetts. They miss connections when Gordon comes to Massachusetts to meet her, and she flies out to Arizona to attend a workshop. Eventually they do make a face-to-face connection.

“She couldn’t help but wonder whether Gordon’s commitment to cactus revealed some serious character flaw. Maybe their long distance relationship suited him perfectly. He could admire her from afar without needing to care for her in any real way. People who loved cactus, she decided, must be solitary by nature.”

This is starkly beautiful prose, detailing the relationships of damaged characters. While the story has flaws, such as relationships developing at a strangely accelerated pace, the overall story structure works well. Gordon is a great protagonist: impulsive, weak, but someone who attempts to do good. Russell’s observations of contemporary life ring true, particularly when Gordon reflects upon the confessionals he and his peers were forced into at “campfire” nights in a Utah program for troubled teens. It was there he first fell in love with the West and, ironically, viewed his exile as a salvation rather than a punishment. Russell’s book reminds readers that the desert both harms and heals.