Free Spirit: Growing Up On the Road and Off the Grid 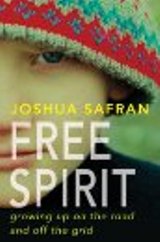 On the Revolutionary Road

By the time Joshua Safran was ten, he had hitchhiked for thousands of miles and befriended hundreds of remarkably strange people. His mother and he had danced around bonfires, participated in government protests and practiced strengthening their psychic powers. They lived in communes, covens, on the road, and in other rural areas with the dream of finding a revolutionary community of intellectuals.

The title of Safran’s memoir, Free Spirit: Growing Up On the Road and Off the Grid, becomes ironic when his alcoholic, wife-battering stepfather enters his life. Already more mature than most of the adults in his life, Safran grows up even more quickly and begins to dream of his own escape: into mainstream society, striving to belong and finding roots.

“With the death of the old dream, a new dream was born. My mother stood on that redwood porch at the commune like Moses on the far side of the Red Sea, realizing that the destruction of Pharaoh’s army wasn’t going to lead to a New Egypt. No, it was time to wander through the wilderness in search of a new home.”

Safran avoids self-pity and sensationalism by keeping a consistent tone that’s both affectionate and wry. He never hesitates to point out contradictions and hypocrisies with humor, but also commentary on both mainstream society and the counter-culture movement. Domestic abuse passes from generation to generation until good role models supplant the violent ones.