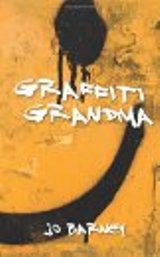 Alcoholics, Abuse and Murder–Oh My!

Ellie is a lonely, grouchy old lady. She lives in a tenement building, shops at food pantries, and fills her days scrubbing graffiti off of the buildings and mailboxes in her neighborhood, erasing the ugliness from her block as she wishes she could erase the ugliness in her memory. When she meets Sarah, a lost, frightened teenager dressed in dark clothing who is running away from a group she calls her “family,” Ellie doesn’t want to help. But something inside her makes it impossible for Ellie to turn away completely. So begins Portland author Jo Barney’s Graffiti Grandma, a novel with a misleadingly glib title and a dark, but heartwarming, story to tell.

Told not only through Ellie’s point of view, but also through those of Sarah, a detective, and two lost young men whose lives take very different turns, Graffiti Grandma broaches the subjects of alcoholism, drug addiction, autism, sexual abuse, and murder. In short, it is not a lighthearted story. Throughout the different narratives, portraits emerge of very flawed, battered, and wounded people, injured by circumstances, others, and themselves, and the myriad ways in which their paths intersect, and the impact each has on the other.

While Graffiti Grandma tells a compelling story about the importance of family and human connections, at times it all feels like a bit too much. There isn’t one character in the book whose story isn’t tragic in some way, and the level of trauma and pain in each character’s life can seem overwhelming  — and hard to believe. After all, what is the likelihood that all of these wounded creatures would cross each other’s paths in such meaningful ways? The horror of it can seem a bit forced. However, Graffiti Grandma is ultimately a tale of redemption, and it is written precisely and with compassion. Jo Barney is onto something.