Indivisible? The Story of the Second American Civil War 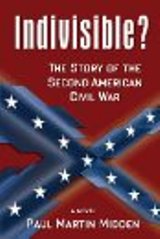 In a country as ideologically divided as the United States, is an armed revolution possible, even likely? Paul Midden has written a work of fiction which he ties to current events with fact-based asides to tie the fiction to the facts as he sees them.

The underlying story is one of factions. Madison, Hamilton and Washington, and probably others of the Founding Fathers “expressed the belief that factions would create divides that would ultimately dismantle the Government”. The connection is that besides the known factions like tea party conservatives, Occupy, and religious organizations, etc. every multi-billionaire on earth is capable of being a faction and it is one of these that is the protagonist of the story. In this case, it is the Blinder brothers that provide the nucleus, and the money, around which the “make America a Christian country again“ people, the Confederate States will rise again people, and the general anti big government groups coalesce. On the other side, is a surprisingly small band of Government officials and contract agents who uncover the edges of the plot and try to stop it. They don’t quite succeed.

Mr. Midden has done a credible job of producing a readable story that has suspense, action, technology and all the other elements of interesting contemporary fiction. That he also provides a look at how our current disagreements could lead to open rebellion could happen. In other words, a cautionary tale.