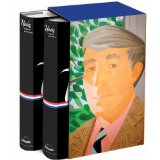 It is no stretch to say John Updike was one of America’s most talented and important writers; and remains still today. Whether it was reading A&P in freshman English class or exploring small town American in Updike’s “Olinger” stories, nearly everyone has experienced Updike’s beautiful writing. He truly is the master of “giv[ing] the mundane its beautiful due.”

In this collection by The Library of America, compiling 186 stories, Updike’s genius is put forth in its entirety. The first column brings together 102 of Updike’s early stories; masterpieces like A&P and Pigeon Feathers. These early stories introduce readers to Updike’s Olinger, PA, the quintessential American town. It is in this town where Updike is able to shine a light on what life was like in 1950’s America.

While the first volume portrays younger protagonists and Americana, the second volume in this series shows an aging protagonist. Introspection, metaphysics, and the world fill these later stories, like The Afterlife, The Woman Who Got Away, and his final story The Full Glass.

Updike is one of those rare authors that appeals to a diverse group of people. Lovers of American will fit right into these stories, recognizing the daily joys and struggles of small-town America. Philosophers will find wisdom in over forty years of storytelling, and those that just want  a good story will have no trouble finding many in these nearly two thousand pages. Everyone who enjoys good writing will find joy in The Library of America’s collection of John Updike’s short fiction.