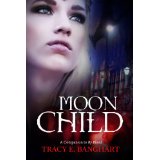 Remember Emma Wong from By Blood? Remember her friend Diana? Tracy E. Banghart is back and has written Moon Child as a companion novel to By Blood. This story follows Diana and it won’t disappoint.

It begins a few days before Halloween in a small town with symbolic name, New Freedom. It’s evening. A church youth group is playing creepy games at the church’s graveyard. The headstones barely gleam in the moon’s light. A chilly wind blows through the darkness. Despite the cold, seventeen year old Diana Calvert shivers and sweats. Scared to run into something or someone, she walks slowly. But she manages to loses her balance and falls towards a gravestone. Arms catch her…the arms of a pale young man with black long hair and blue eyes. Diana thinks that he is much too handsome to be a corpse. Who is this strange? Could he be dangerous? The mysterious Nicholas Woodhaven will tell her nothing. He is the same age as Diana but he doesn’t go to school. His skin is papery and cold. Moreover, he is always dressed in black and appears only in the dark. One of Diana’s friends guesses that he could be a vampire. Nicholas confirms it and Diana believes him. However, she doesn’t stop seeing him. Diana is fascinated by this new guy. Being in love with a vampire is so exciting.

Soon something unusual happens. Two people are found dead with neck wounds and have been drained of their blood. Diana has connections to both victims. One was a classmate who was mean to Diana and the other was the owner of a flower shop where Nicholas bought flowers on the day of the murders. Rumors about Nicholas are beginning to spread. Diana trusts Nicolas but decides to confront him. Will she find out the truth?

Tracy E. Banghart has written a beautiful first-love story that also deals with trust, friendship and sorrow. The neat combination of romance and mystery makes this book interesting for both young adult and adult readers.