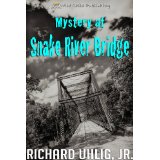 Teens Investigate Murder and Scandal in a Small Town

Near a small Kansas town, a car is found in the river under a bridge. The owner of the local newspaper hears the call on the police scanner and prepares to head for the scene. His 17-year old son, nicknamed “Kodak”, also works at the newspaper and begs to go along as the photographer. Arriving at the bridge, they learn that a local woman has died. Even though the sheriff rules the death an accident, Kodak and his friends begin to believe the woman was murdered. Their suspicions are rebuffed by all the adults, but they continue to investigate, sneaking around at night and secretly recording their suspect.

This story paints a delightful picture of life in middle America even as it leads the reader down a path of danger, treachery, murder and even a bit of romance. Prepare for a shocker at the end.